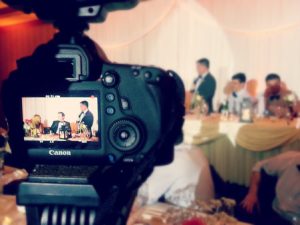 Before any work begins, a wedding filmmaker meets the couple. This is to discuss things on how they want the wedding to be shot and organize things like dates, theme, shooting schedules, locations, equipments and other extra things that might get in during the entire wedding from the prenup to the sending off. Once everything is set and cleared, the work sets to start.

Wedding filmmaker uses HD DSLR cameras and uses a variety of lenses. Along the way, tripods and sliders are also used. However, since Sydney’s wedding videographers have perfected how to use their gadgets and tools well and had development kinship to their beloved cameras, Sydney weddings are never like a movie set. They know how to get close to capture hard to shoot angles by using zoom lenses and use full range but lightweight cameras to be able to stay in the most appropriate distance and not to disturb the moments or put couples and people in any awkward positions. Discreet is the name of the game they have played so well.

Since the wedding is being filmed like a movie, capturing moments is based on a script and scenes are sequenced on how they met, the proposal, the preparations, the ceremony, reception and the sending off moments are captured and detailed. DNM wedding films for example tell a story of love from the moment the couple set their eyes on them, how they fell in love and the decision to be as one heart. All moments are captured as they happen naturally and with all the emotions shared at that moment.

Editing and delivery of works

Since  editing is part of the wedding videography, top wedding videographers only  used  materials that  are free from copyright infringement such as the music used  and  so that the  wedding film won’t be taken out from the internet. Some may do same day edit while others don’t because editing is time consuming and videographer’s creativeness is still pouring out during this stage to add drama and color to the whole wedding. Most of the time, finished film is delivered from 8 to 12 weeks after the wedding.

If you want your wedding to be a lifetime memory, a Sydney wedding videographer who is a filmmaker, too will turn it into a film-like memories.